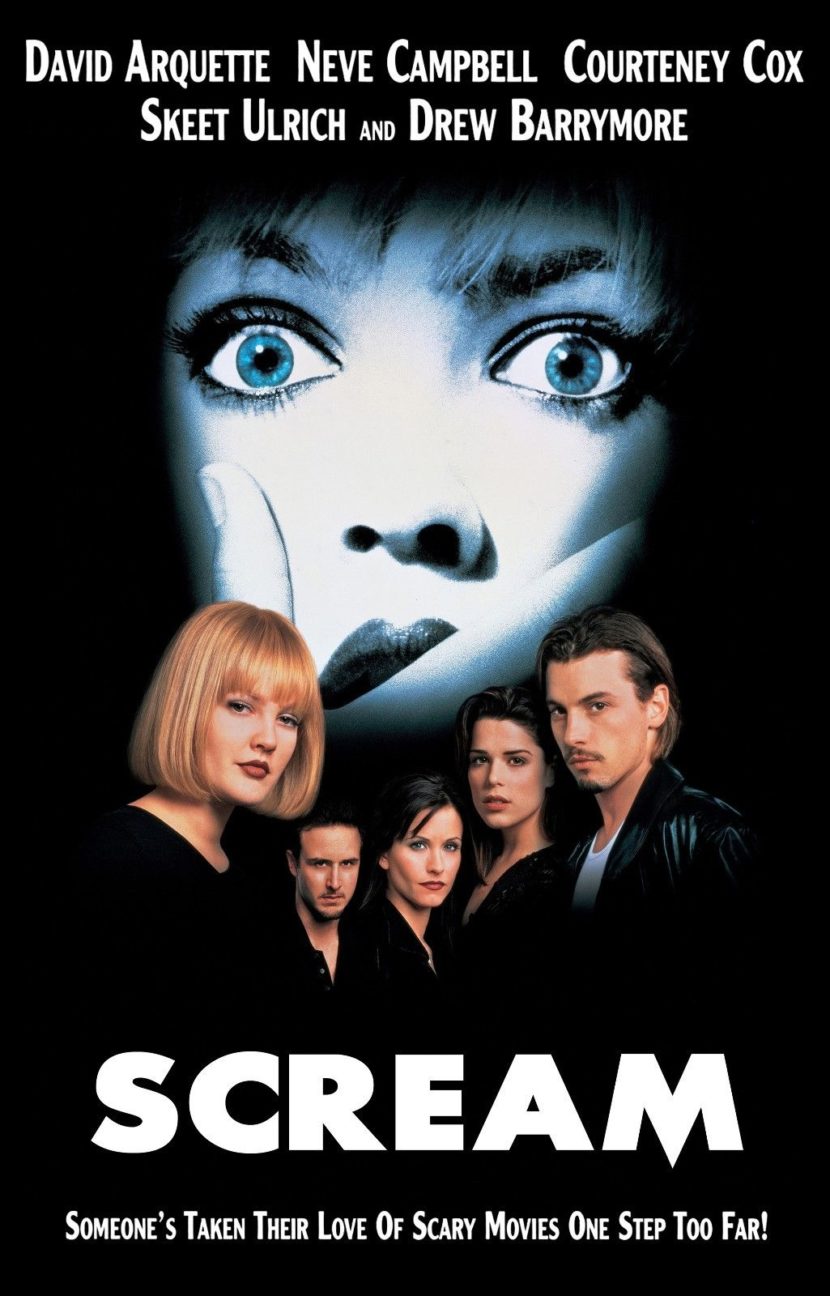 Scream is a 1996 American slasher film written by Kevin Williamson and directed by Wes Craven. The film stars Neve Campbell, Courteney Cox, Drew Barrymore, and David Arquette. Released on December 20, 1996, Scream follows the character of Sidney Prescott (Campbell), a high school student in the fictional town of Woodsboro, California, who becomes the target of a mysterious killer known as Ghostface. Other main characters include Sidney’s best friend Tatum Riley (Rose McGowan), Sidney’s boyfriend Billy Loomis (Skeet Ulrich), Billy’s best friend Stu Macher (Matthew Lillard), film geek Randy Meeks (Jamie Kennedy), deputy sheriff Dewey Riley (Arquette), and news reporter Gale Weathers (Cox). The film combined comedy and “whodunit” mystery with the violence of the slasher genre to satirize the cliché of the horror genre popularized in films such as Halloween and Friday the 13th. The film was considered unique at the time of its release for featuring characters who were aware of real world horror films and openly discussed the cliché that Scream attempted to subvert.

Based partly on the real-life case of the Gainesville Ripper, Scream was inspired by Williamson’s passion for horror films, especially Halloween (1978). The script, originally titled Scary Movie, was bought by Dimension Films and was retitled by the Weinstein Brothers just before filming was complete. The production faced censorship issues with the Motion Picture Association of America and obstacles from locals while filming on location. The film went on to financial and critical acclaim, earning $173 million worldwide, and became the highest-grossing slasher film in the US in unadjusted dollars. It received several awards and award nominations. The soundtrack by Marco Beltrami was also acclaimed, and was cited as “[one] of the most intriguing horror scores composed in years.”[3] It has since earned “cult status.”[4] Scream marked a change in the genre as it cast already-established and successful actors, which was considered to have helped it find a wider audience, including a significant female viewership.

Scream was credited with revitalizing the horror genre in the 1990s, which was considered to be almost dead following an influx of direct-to-video titles and numerous sequels to established horror franchises of the 1970s and 1980s. These sequels drew decreasing financial and critical success, as they exploited clichés upon which films in the genre had become reliant. Scream‘s success spawned a series of sequels, though only Scream 2, released in 1997, achieved a level of commercial and critical success equal to the original film. In the years following the release of Scream, the film was accused of inspiring and even inducing violent crimes and murders.

[…] Originally announced in 2007 under the title Half to Death, the film was released on October 13, 2017, by Universal Pictures. It has grossed $122 million worldwide on a $4.8 million budget and received generally positive reviews, with critics deeming the film entertaining while acknowledging the familiar premise, and describing it as “Groundhog Day meets Scream“. […]