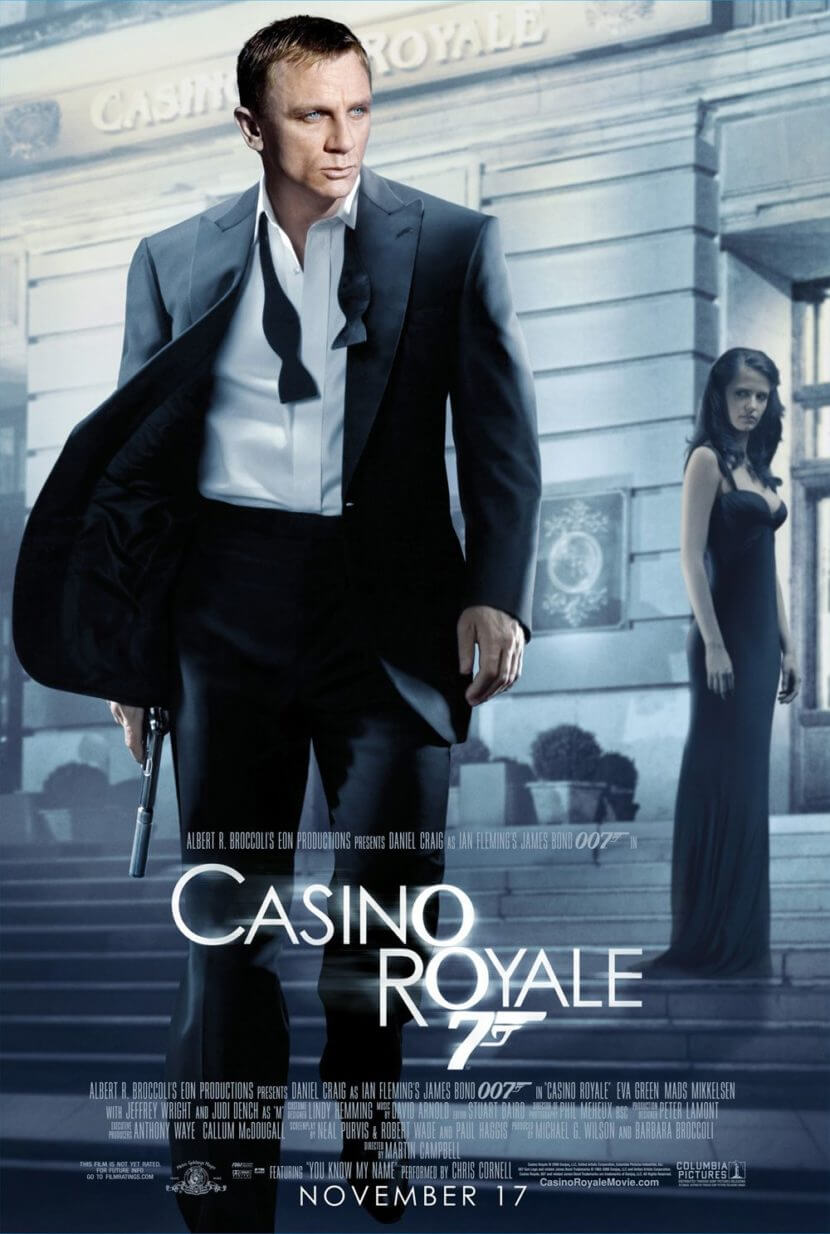 Casino Royale (2006) is the 21st film in the Eon Productions James Bond film series and the first to star Daniel Craig as the fictional MI6 agent James Bond. Directed by Martin Campbell and written by Neal Purvis & Robert Wade and Paul Haggis, the film marks the third screen adaptation of Ian Fleming’s 1953 novel of the same name. Casino Royale is set at the beginning of Bond’s career as Agent 007, just as he is earning his licence to kill. After preventing a terrorist attack at Miami International Airport, Bond falls in love with Vesper Lynd, the treasury employee assigned to provide the money he needs to bankrupt a terrorist financier, Le Chiffre, by beating him in a high-stakes poker game. The story arc continues in the following Bond film Quantum of Solace (2008). Skyfall (2012) and Spectre (2015) also feature explicit references to characters and events in this film.

Casino Royale reboots the series, establishing a new timeline and narrative framework not meant to precede or succeed any previous Bond film,[3][4] which allows the film to show a less experienced and more vulnerable Bond.[5] Additionally, the character Miss Moneypenny is, for the first time in the series, completely absent.[6] Casting the film involved a widespread search for a new actor to portray James Bond, and significant controversy surrounded Craig when he was selected to succeed Pierce Brosnan in October 2005. Location filming took place in the Czech Republic, the Bahamas, Italy and the United Kingdom with interior sets built at Barrandov Studios and Pinewood Studios. Although part of the storyline is set in Montenegro, no filming took place there. Casino Royale was produced by Eon Productions for Metro-Goldwyn-Mayer and Columbia Pictures, making it the first Eon-produced Bond film to be co-produced by the latter studio.

Casino Royale premiered at the Odeon Leicester Square on 14 November 2006. It received positive critical response, with reviewers highlighting Craig’s reinvention of the character and the film’s departure from the tropes of previous Bond films. It earned almost $600 million worldwide, becoming the highest-grossing James Bond film until the release of Skyfall in 2012.